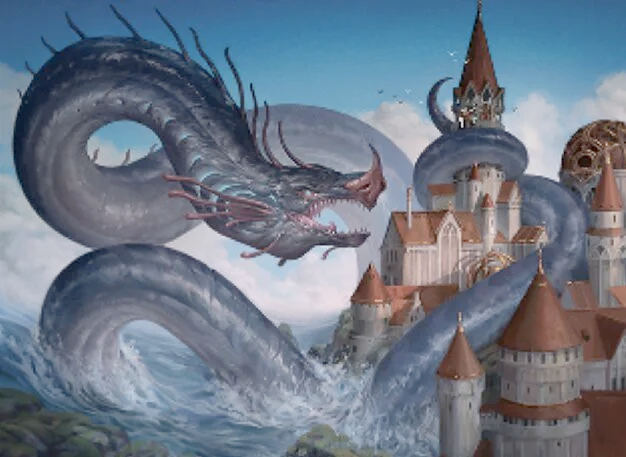 Veteran players remember Gurmag Angler, the sleek delve threat once seen in decks like Grixis Shadow and Hollow One. At one mana, the Zombie Fish was brutally efficient and surprisingly hard to kill — so much so that Legacy players once thought Gurmag might need to be banned in their format (until cooler heads prevailed and identified Deathrite Shaman as the culprit).

The Zombie Fish has mostly disappeared from today’s Modern as removal has gotten better, black has gotten weaker, and stronger 1 mana threats have emerged. But what if Gurmag came with Ward? That’s the promise of Tolarian Terror, a new one mana threat from Dominaria United. Terror is in a much stronger color and doesn’t consume the graveyard, meaning that it’s possible to deploy multiple Serpents in one turn, while also leaving mana open for additional interaction. Sure, the opponent can kill them, but only at a tremendous tempo deficit thanks to Ward 2.

We are starting to see early returns on Tolarian Terror in both Modern and Pioneer. But questions remain. How far we can lean into the graveyard before exposing ourselves to hate? Can Terror earn its spot over even bigger options like Murktide Regent? Or can they perhaps be played together? Morde and Cavedan investigate this week, looking at several new decks.

On the Flashback, the crew shares their preliminary findings with Meria, Scholar of Antiquity, including Hullbreaker Horror Combo, Song of Creation Combo, and Artificers tribal Thopter-Sword. They also study the early previews from The Brothers’ War, including Urza, the Mightstone and Weakstone, and Surge Engine.