The Rules of Engagement on Day 1 of Pioneer 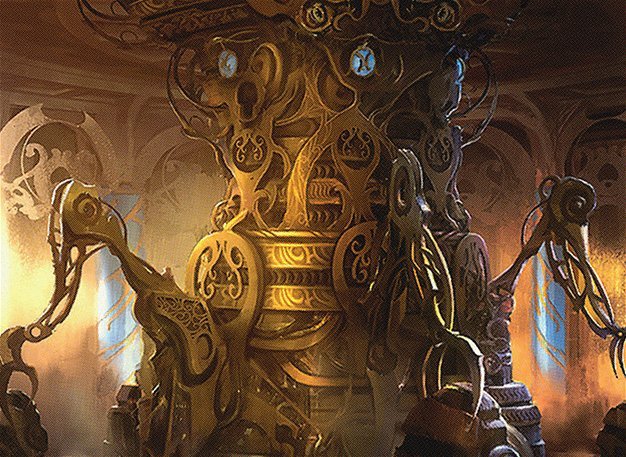 (Note: This article was originally published at arenadecklists.gg.)

It’s not every day that we are gifted with a brand new format. The announcement of Pioneer, which encompasses all sets from Return to Ravnica onward, has sent players scrambling through their boxes of forgotten staples from Standard’s past or scouring the internet for technology from the short-lived Frontier format. Brews are being posted fast and furious on Pioneer Decklists and the first decklists from Magic Online are coming in.

The beginning of a new format is a strange and wonderful thing. “Brewer’s paradise” is a phrase that gets thrown around often, and if that doesn’t apply to times like these, when does it ever apply?

The truth is that successful brewing is actually quite difficult when a metagame is completely undefined. We cannot attack a meta from unexpected angles if we ourselves have no idea what to expect.

One solution is to simply take a wait-and-see approach: tons of creative energy is going to be focused on Pioneer, and in a few weeks’ time a metagame might eventually emerge and settle. In the meantime, though, we will have to sift through confusing and fragmentary information: curated deck dumps from Magic Online and anecdotal proclamations on social media that such-and-such a deck is “the real deal” or “felt great” across a statistically meaningless sample size of games.

Or, we could theorize what is actually good in Pioneer, and then dive headfirst into the fray. This article is designed to equip you to do just that. I will outline the fundamental constraints on the format given the available card pool, and the archetypes that are likely to arise in Week 1 that will function in turn as gatekeepers to successful brewing. How you choose to use this information in your own deckbuilding efforts is up to you. Let’s get started!

Identifying Gaps in the Card Pool

The first thing that stands out about Pioneer is what is lacking in the card pool, especially in comparison to what we might be accustomed to from past iterations of Standard, Frontier, or Modern. Most notably:

The Most Powerful Cards Available

Once we have taken stock of what is missing, the next step is to see what remains. In a vacuum, the most powerful tools available in the Pioneer card pool are the following:

Each of these packages can and will form the backbone of an excellent Day 1 deck, as their track records of success in past formats can amply attest. If we assume that each of these strategies will be significant players in Pioneer, we can now postulate some of the basic rules of engagement for Day 1 of the new format.

Given what is available in Pioneer’s card pool and what is missing, here are the most likely rules of engagement for building a competitive deck out of the gates:

Only a few quibbles can be found with red’s card pool: the burn options aren’t great at dealing three damage cheaply (conditional Bolts like [mtg_card]Skewer the Critics[/mtg_card] and [mtg_card]Wizard’s Lightning[/mtg_card] are possible) or at going to the face. The most attractive splash color (green, for [mtg_card]Atarka’s Command[/mtg_card] and perhaps [mtg_card]Destructive Revelry[/mtg_card] to combat [mtg_card]Leyline of Sanctity[/mtg_card]) lacks fastlands to support it. Other than that, red has few obvious weaknesses and should farm MTGO Leagues on Day 1 as other people test out their more optimistic brews.

From there it is a question of choosing how to win the game. Abzan, enabled by [mtg_card]Concealed Courtyard[/mtg_card] and [mtg_card]Shambling Vent[/mtg_card], gives access to [mtg_card]Siege Rhino[/mtg_card] and more lifegain options, as well as potentially powerful sideboard tools like [mtg_card]Rest in Peace[/mtg_card].

The choice between these endgames will depend on what other endgames you fear from the opposing midrange, combo, and control shells, but the basic Thoughtseize-Push-Brutality package to survive the early game is what makes this possible in the first place. [mtg_card]Thoughtseize [/mtg_card]into [mtg_card]Oko [/mtg_card]is likely to be a headliner strategy as long as these cards are legal.

3. Artifact decks have the tools to fight against both creature-based aggro and midrange/control strategies, largely thanks to [mtg_card]Hangarback Walker[/mtg_card]. [mtg_card]Walking Ballista[/mtg_card] provides some counterplay against Saheeli and small Teferi. The other artifact-related cards are powerful as synergy pieces but somewhat unimpressive against removal.

4. Each of the strategies outlined so far includes ways to punish small creatures and especially X/1s: [mtg_card]Goblin Chainwhirler[/mtg_card] (plus cheap burn in general), Liliana + [mtg_card]Fatal Push[/mtg_card], and [mtg_card]Walking Ballista[/mtg_card]. For this reason, think carefully before leaning too hard into [mtg_card]Llanowar Elves[/mtg_card] + [mtg_card]Elvish Mystic[/mtg_card], or blue tempo with 1/1 fliers. [mtg_card]Gilded Goose[/mtg_card], with that crucial second point of toughness, may prove to be the most reliable accelerator, and also a lifegain tool against red. Goose + [mtg_card]Botanical Sanctum[/mtg_card] will, in turn, make Oko a logical splash into most green decks.

Removal by itself will not defeat a 4c Saheeli core. If relying on specialized hate cards to avoid a herd of lethal cats, make sure your weapon does not fold to [mtg_card]Veil of Summer[/mtg_card], Teferi, or Oko. This means that an [mtg_card]Unmoored Ego[/mtg_card], a counterspell, or a creature like Ballista, Ferocidon, or [mtg_card]Manglehorn [/mtg_card]will not be enough. It is safer to go underneath this deck or attempt to go way over the top.

[mtg_card]Aetherworks Marvel[/mtg_card] is shut down by [mtg_card]Teferi, Time Raveler[/mtg_card], and is somewhat vulnerable to Oko, both likely to be popular main deck cards.

[mtg_card]Jeskai Ascendancy[/mtg_card], once a top contender in Frontier when paired with [mtg_card]Sylvan Awakening[/mtg_card] + cantrips, will now need to contend with [mtg_card]Thoughtseize [/mtg_card]and [mtg_card]Abrupt Decay[/mtg_card] and might crumble due to lack of redundancy. The absence of fetchlands also punishes this strategy, seemingly demanding a high shockland count that in turn makes the deck even weaker against Red Aggro.

The ultimate viability of the strategy will depend on how well these creatures line up against the field and/or how many relevant hate cards can be shoehorned into the 75. If [mtg_card]Charming Prince[/mtg_card], [mtg_card]Knight of Autumn[/mtg_card], [mtg_card]Gilded Goose[/mtg_card], or [mtg_card]Spell Queller[/mtg_card] provide effective counterplay against other top decks, then Company decks should do well, although the lack of generically powerful removal in the Bant colors is a slight concern. Most likely, Company decks will want to also lean on walkers like Oko or Teferi, or lean into an aggressive slant with something like Spirit or Human tribal.

8. Control decks will face several existential threats right out of the gates: blistering speed from Monored, punishing three mana walkers in Oko and small Teferi, and a nigh-unbeatable endgame threat in [mtg_card]Emrakul, the Promised End[/mtg_card].

Notwithstanding Emrakul and Ulamog, control decks have a decent chance of having inevitability against most of the field, with the possible exception of “big mana” [mtg_card]Nykthos [/mtg_card]or[mtg_card] Field of the Dead[/mtg_card] strategies. The challenge will be in not losing the early game, whether to lethal damage from red decks, a snowballing Oko or Teferi, or a well-timed [mtg_card]Thoughtseize [/mtg_card]or [mtg_card]Veil of Summer[/mtg_card]. Control has plenty of powerful tools, but they aren’t necessarily any more powerful than what other decks will have access to.

Wrap-Up: Summarizing the Rules of Engagement

Plenty more could be said, as there are literally hundreds of strategies that players are likely to attempt in the opening skirmishes of the Pioneer format. The basic principles, however, are likely to revolve around the cards and archetypes outlined above. These are the most abstractly powerful cards and archetypes in Pioneer, and they also boast the strongest pedigrees of past success in Standard, Frontier, and Modern.

The rules of engagement can thus be summarized as follows:

• Have a plan for Mono-Red, as well as the sideboard cards that Mono-Red will likely have against you.

• Do not fold to a single Thoughtseize.

• Do not rely too heavily on X/1 creatures.

• Have a plan for Saheeli combo that is more robust than just removal spells.

• Be prepared to go toe to toe with Oko, Teferi, and Collected Company.

• Bring hate for artifacts and graveyards, and do not fold to these hate cards either.

• If playing for the long game, be ready to fight against BGx, control, and Emrakul.

It is entirely possible, of course, that these pillars are exploitable. Together with the brain trust at the Faithless Brewing Podcast, I fully intend to start probing the format’s pressure points the minute the format goes live on MTGO. But the first step of successful brewing is always understanding the constraints of the existing metagame, and on Day 1, you will need to envision that meta yourself before you can attack it. Hopefully these guidelines will equip you to do just that.