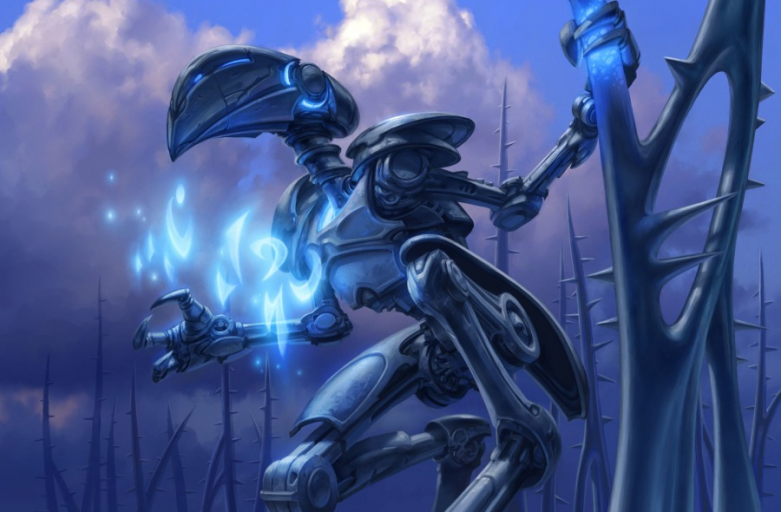 Twice each week, Wizards publishes a curated selection of decklists that went 5-0 in the Modern League on Magic Online. We love to track these lists, as they are hotbed of innovation and spicy brews.

We also share these decklists on Twitter before these articles are published here. You can follow us @FaithlessMTG to get the latest tech as it happens and see what the pilots are saying about their builds. And if you enjoy this content, feel free to give us a like, follow, and retweet — the algorithms appreciate it and so do we!

Pro Magic may be cancelled but Modern remains hotter than ever. @CavedanMTG is tracking the latest innovations as we get ready for MH2.

Here are the highlights from this week’s 5-0 lists 👇 pic.twitter.com/TiBDJO4kwG

With that said, here are my picks for the spiciest brews of the week:

Expressive Iteration is on fire these days, even propping up perennial underperformer Delver of Secrets.

Full playsets of Disrupting Shoal and Force of Negation feels extreme, but Iteration is likely to use up all of your mana, so the free cast options come up big.

The other surprise is Hexdrinker, which has quietly risen to the status of multi-archetype staple. Here the snake takes the spot once held by Hooting Mandrills. I’d be nervous shuffling this up against Lava Darts, but the overall strategy is sweet.

Do you believe in Platinum Emperion? Like, really believe in it? TuggaNaxos apparently does, and decided that 4x Madcap Experiment just wasn’t enough for his all-in Emperion brew.

In this build, Treasure tokens power Shape Anew for copies 5-8 of Madcap Experiment. If you have ever wanted to sleeve up “Sailor of Memes” in Modern, now is your chance!

First league with this brew, insta trophy. Do you know any one else who has trophied with sailor of memes in modern? SIKE!
This decks looks great for grinding leagues and probably terrible for big events 😂
🏆🏆🏆 pic.twitter.com/Wr2jaFl0Eb

We’d love to see a fuller exploration of Shape Anew down the road, perhaps assisted by Throne of Eldraine sleeper Gingerbread Cabin. Of course, that would require a totally new manabase, and likely a different deck.

What if Amulet Titan and Tron had a baby? A player named songoftheelders submitted this list for fpawlusz’s Dono Deck Thursdays, and the results were glorious.

You probably heard about it, but could it really be true? Could Titan Tron exist? Is such an absurd and nonsensical abomination even possible?! And even worse, CAN IT REALLY 5-0 A MODERN LEAGUE?!?!?! The answers to all your questions lie 1 click ahead: https://t.co/M9p0ST71gx

This unholy mashup is shocking to say the least. Some would call it unnatural. Others might call it an abomination, or a monstrosity. In any case, fpawlusz has diligently recorded his 5-0 to haunt the eyes of gods and men.

Green Tron plays as few as 19 lands, while Amulet lists routinely play north of 30. This mashup found room for 24 lands plus the full suite of cantrips, and even a couple Arboreal Grazer. Perhaps there is no wrong way to big mana?

This deck is the stuff dreams are made of.

Mistbind Clique is fragile, but it is the most dazzling card Faeries can play. What if we had even more copies? Say hello, Elder-Deep Fiend! Apart from surprised factor, Deep-Fiend is actually fairly hard to kill given the commonly played removal these days.

Brazen Borrower has fully replaced Vendilion Clique as the three drop of choice, and there’s even a pair of Hypnotic Sprite to lean into Adventures. This is a tricksy deck full of surprises, including a full playset of Chalice of the Void in the sideboard.

From the pilot who brought you Codie, Vociferous Codex comes this new update on Electrobalance, now with three copies of Collected Conjuring. It may look strange, but silencsong has already trophied four times with the list!

The trick to Conjuring is not just having a density of sorceries, but also getting your mana worth from the sorceries you find. Luckily the free spells are worth a lot, and 3x Pillage adds another impactful spell for Conjuring to find.

Bring to Light has finally come into its own, anchoring multiple tier strategies in Modern. Will the same ever happen for Glittering Wish?

Been trying to tell everyone that glittering wish is awesome but did you listen??? https://t.co/z9ekNBEFwS

5c Niv and Jeskai Ascendancy pilots have long known the power of Wish. With enough time and mana, it can find anything you need: answers, hate pieces, Teferis, even Koma, Cosmos Serpent!

The trick is to not die before your Demonic Tutor comes online, so a hard control strategy has a certain logical appeal.

This list is chock full of interaction and proven Modern staples, so it’s just a matter of picking the right finishers. Aspiringspike has opted for Sprite Dragon and Kroxa, which can close things out quickly after the discard punches a hole.

Four color and Temur builds put Velomachus Turns on the map, but there’s plenty of tuning left to do. If you are curious about the ins and outs of the strategy, our own Zach “Manacymbal” Ryl has written a detailed primer on the strategy:

The early interaction is sparse, and includes suspicious tech like Izzet Charm. You really need your interaction to line up well, but help can be found in sideboard with plenty of cheap spot removal.

Finally, we’d be remiss not to mention this Deadly Brew from benchsummer, as Sedgemoor Witch is our featured card this week at Faithless Brewing MTG.

25 lands seems more realistic than the 20 land Rakdos Witch builds that have been running around, even with Smallpox eating away at your resources. Flagstones of Trokair helps with that, and tokens from Witch or Lingering Souls will also help soften the blow.

I’m also thrilled to see Deadly Brew in a successful list, but I don’t quite understand it. Its best use seems to be picking off Wrenn and Six, but is that really worth the splash?

In any case, Benchsummer’s list is doing something right, as it also achieved a 2nd trophy this week in the hands of Saffron Olive.

Another Week in the Books

There were 111 Modern lists published this week from the League 5-0s alone. Narrowing it down to just these nine wasn’t easy, as the pace of innovation in Modern continues to impress. The Prelims and Challenges will help separate the contenders from the cinderellas, and the format is sure to be shaken up again soon with MH2 dropping in a few short weeks.

Until then, you can listen in twice per week at the Faithless Brewing Podcast to hear about our own spicy brews, and follow us on Twitter to get the spiciest tech as it drops. Thanks for reading and happy brewing!