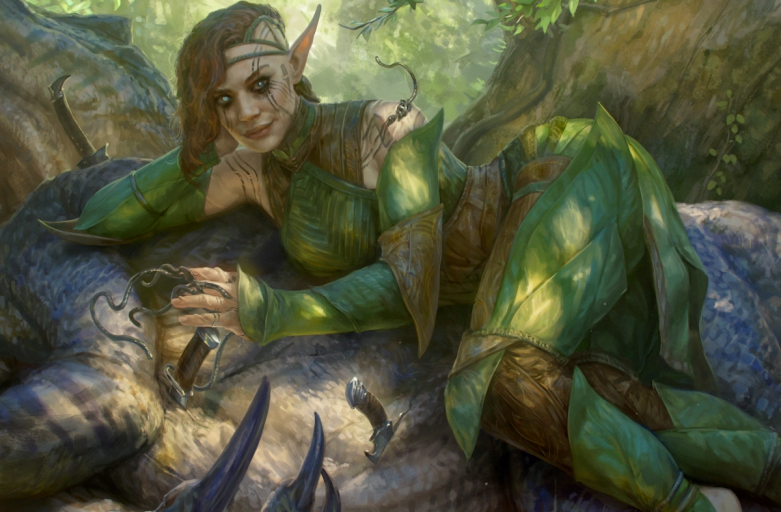 Three of the most important cards for Modern and Pioneer headline the second installment of our Dominaria United Set Review.

Rundvelt Hordemaster powers up Goblins decks in a huge way. The first true 2 mana Goblin lord is also a tremendous source of card advantage and resiliency. Turning every death (including tokens, including itself) into fresh draws while also curving out well in aggressive starts is a game changer. Hordemaster also pairs with cost reduction effects and has combo potential with Skirk Prospector. We already liked Squee, Dubious Monarch, and now we like it a whole lot more.

Leyline of Binding is stunningly powerful. It may be the most powerful removal spell since Swords to Plowshares. Leyline provides a massive incentive to assemble a Domain mana base, and will be format-defining removal in both Pioneer and Modern. On top of its raw power, it can even synergize with proven engines like Enigmatic Incarnation or Enchantress to pull off some crazy feats.

Finally, low curve decks have a new enemy to fear in Temporary Lockdown. Certain strategies like Hammer, Hardened Scales, or tribal aggro get absolutely devastated by Culling Ritual. Temporary Lockdown makes this effect cheaper and even repeatable, thanks to Yorion and Teferi, Time Raveler.

From there, the offerings get more speculative, but no less interesting. Tolarian Terror has Gurmag Angler vibes with huge upside, but relying on the graveyard is a risk. Founding the Third Path may subsidize delve or See the Truth. And of course it wouldn’t be a Faithless Brewing Set Review without Cavedan going crazy over new kicker cards for his Drake Whack deck.

Prodigal co-host Zach “Manacymbal” Ryl returns today to help us break down all the hits and misses, and to catch up on the latest MTG news. Happy brewing!

I don’t get a chance to listen to as many MTG podcasts as I’d like, but Faithless Brewing (@FaithlessMTG) is one that I try really hard not to miss. https://t.co/8B5sT2hzXv

Now Darshik has run with the ball and brought the strategy closer to Compleation (30th in yesterday’s Modern Challenge).