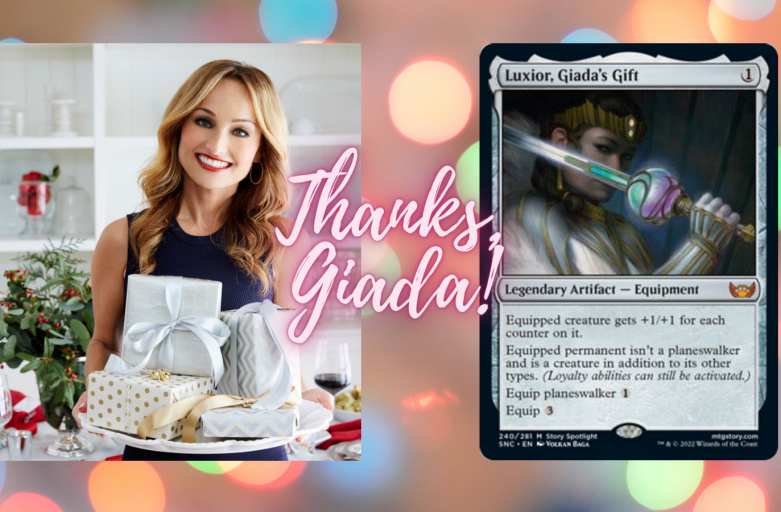 Luxior, Giada’s Gift is the most intriguing Streets of New Capenna card for Modern and Pioneer. It has multiple combo lines, opens up unique brewing space, and has tricky rules interactions. Let’s take a look at some promising directions to explore.

First, the combos. Equipping Luxior to Devoted Druid gives infinite mana, because each -1/-1 counter you add to Druid is offset by Luxior’s bonus. This duplicates Vizier of Remedies, but it can be found off Stoneforge Mystic and Urza’s Saga. You might also want Karn, the Great Creator, in which case an extra Luxior can live in the sideboard.

This is a high profile combo that has gotten a lot of early attention; expect to see lots of people trying this out of the gate. The biggest challenge will be finding and untapping with Devoted Druid itself, but Luxior rounds out the surrounding package nicely. Don’t forget to put Viridian Longbow into your Stoneforge and Saga tutor package!

A lesser known combo involves equipping Luxior to Saheeli Rai to make her into a creature. Saheeli Rai can now -2 to copy herself. The new Saheeli won’t be a creature and won’t have any equipment, but crucially it is an artifact thanks to Saheeli’s ability. Keep the new copy (legend rule), and -2 again on itself as many times as you wish. A third piece like Altar of the Brood converts all those ETBs into a win.

Note that your third combo piece has to rely on enters the battlefield or death triggers. There will not be time to activate any abilities between the resolution of Saheeli’s -2 and the legend rule forcing you to sacrifice one of them. This is why Grinding Station does not work in the combo, but Disciple of the Vault and Reckless Fireweaver do.

The Saheeli combo already exists in Modern, but is new to the Pioneer card pool. Saheeli has been without a running mate in Pioneer ever since the banning of Felidar Guardian, our attempts to use Saheeli with Esika’s Chariot notwithstanding.

In Modern, we get redundancy from Liquimetal Torque + Liquimetal Coating, and can find Luxior and Altar of the Brood off the usual suspects like Urza’s Saga or Artificer’s Intuition. Note that Altar of the Brood also combos with two copies of Felidar Guardian (or one Felidar + 1 Glasspool Mimic), so including Felidar as a secondary combo makes a lot of sense. Karn, the Great Creator might also get involved if going the Liquimetal route.

You can also put this Saheeli package into a Carth the Lion shell. Equip Luxior to Saheeli with Carth in play, and now each legend ruled copy of Saheeli will trigger Carth and pull all the planeswalkers out of your deck.

In a Carth deck, Luxior will have plenty of walkers to potential equip outside of the combo. Just keep in mind that cards equipped with Luxior lose the planeswalker type, meaning they won’t trigger Carth when they die. This doesn’t matter for the infinite Saheeli line (since we only use Luxior to jumpstart the initial activation) but it could lead to some unsuspecting self-blowouts.

Bard Class is another possible competitive home. Luxior isn’t free under Level 3 (only R and G mana costs get the cost reduction), but the deck still appreciates playable legendaries and already runs walkers like Domri, Anarch of Bolas and Xenagos the Reveler. Domri would surely love to become a creature and then fight someone.

We are also inching closer and closer to the Honor-Worn Shaku turbo legendary ramp deck. Yes, I think about this interaction literally every time a cheap Legendary permanent is printed. Tap Oath of Nissa to untap Shaku, tap Karn TGC and Wrenn and Six for mana, maybe get a Kinnan, Bonder Prodigy into the mix.

No, I will not be fielding questions about this deck. We shouldn’t even be talking about it; it’s nowhere near ready.

Speaking of nonsense, the Ozolith enables fun shenanigans with Luxior. Equip a planeswalker to make it a creature, then blink or sacrifice it to move its loyalty counters onto Ozolith. Then re-equip Luxior to another walker, move to combat, collect loyalty and enjoy a quick ultimate.

Venser, the Sojourner stands out because of the self-blink and the game-winning ultimate. This is probably not a serious contender for anything, but it would be fun at the kitchen table.

Okay, back to real stuff. The baseline use of Luxior is to build your own Gideon and attack.

What does it meant to make a planeswalker into a creature? For starters, your planeswalker can no longer be attacked, and doesn’t lose loyalty from damage because the planeswalker rules no longer apply. In exchange, your walker is now vulnerable to all kinds of creature removal. Crucially, the planeswalker-turned-creature still gets to use its loyalty abilities. Thanks, Giada!

Converting loyalty to +1/+1 counters seems simple enough. But what if we want the best of both worlds? A simple Gideon becomes a monster when equipped with Luxior, because you add the bonus on top of Gideon’s natural power and toughness. Ally of Zendikar starts at 9/9 Blackblade at 8/8; Trials at 7/7, and Kytheon at 7/7, AND you still get to activate loyalty abilities to grow your beefslabs even bigger. An aggro/midrange Oops All Gideons strategy seems like a good place to explore.

Just look at these beefcakes. Who wouldn’t want to swing with them?

Which other planeswalkers might benefit from becoming a creature? Elspeth Resplendent, the canonical wielder of Luxior, grows by +3/+3 every turn thanks to her +1 ability creating two additional counters. Her -3 also distributes a shield counter.

Will Elspeth lend herself to a superfriends strategy? I think that’s a logical home for a very sweet new design, but the bar is always high for 5 mana cards.

Here are some more cheap, high-loyalty walkers to bash with:

This is a good time to point out that The Wandering Emperor is already a staple in every constructed format. She turns the corner quickly and has been known to swing a sword well. When Luxior is equipped, the +1 ability grants an additional power and toughness.

Attaching Luxior, Giada’s Gift to a creature is expensive, but worth considering at least. Luxior immediately doubles the bonuses from +1/+1 counters, negates -1/-1 counters, and turns random counters into profit. Is it finally time to Level Up?

Hexdrinker stands out as the most playable of these options. Just don’t go overboard with the Level Up counters. Once you hit 8+, Luxior will fall off the snake.

Some cards can become creatures temporarily. Equip Luxior and now they are permanently creatures. This works nicely with Vehicles; a fully charged Reckoner Bankbuster becomes a 7/7, for example. This is likely to be a niche interaction. Remember you are only allowed to equip to a Vehicle after it has been crewed.

Another cheeky way to get a big attacker is Myth Realized. Equip Luxior to double your the benefit of your counters and you never have to pay the W activation again.

We will certainly be spending more time with Luxior as the previews draw to a close and we finally get to play with these cards. Did we miss any crucial interactions? Which direction should we explore first?

If you enjoyed this article, connect with us on Twitter @FaithlessMTG, and follow us in your podcast app to hear new episodes as soon as they drop.