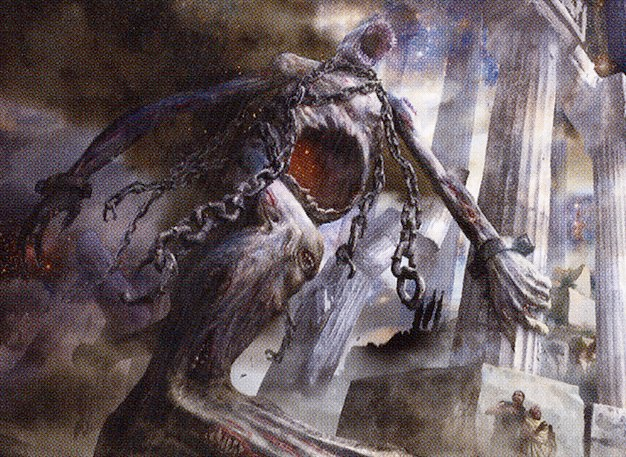 Freshly escaped from the underworld of Theros, Kroxa is at the peak of his powers. 6/6 is nearly as big as it gets. Two mana is nearly as lean as it gets. A true titan of the game, Kroxa packs a punch and delivers value coming and going, but he’s not resting on his laurels. No, King Kroxa is still hungry, and he’s coming for that 5-0 in Modern and Pioneer.

Mechanically speaking, Theros’s titans are fairly complicated under the hood. As pseudo spell effects, they are somewhat reminiscent of the Evoke and Adventure mechanics, but the similarities only go so far. The upshot is that the turn you spend two mana for a Raven’s Crime is a very bad turn. The turn you spend four mana for a 6/6 with a positive ETB and attack trigger is a very good turn, and you can have that turn multiple times in a game.

Kroxa’s power level seems to lie somewhere in the middle, if we are just taking the card at face value. But what if we break the mold and cheat on Kroxa’s hidden costs? Can we skip the Raven’s Crime turn by putting Kroxa directly into the graveyard? Or how about the two mana 6/6 body that is briefly on the battlefield, what if we make extra use of that? The possibilities are as endless as Kroxa’s appetite, so let’s start brewing!