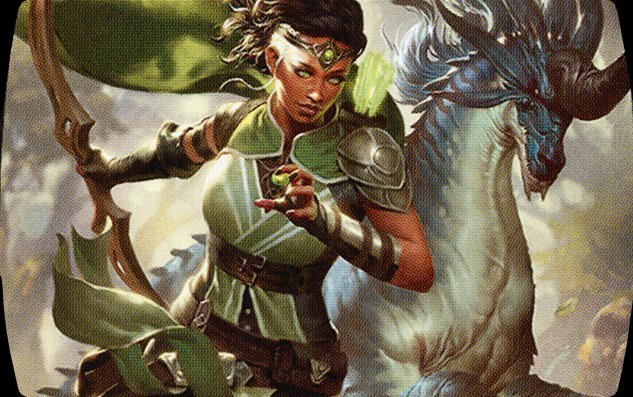 Rogue Refinery returns this week with a look at Vivien, Monsters’ Advocate. The star planeswalker from the Ikoria trailer has yet to see much competitive success, but perhaps the post-Companion metagame will play more to Vivien’s strengths. In Episode 5, Paul, Alias, and the Faithless Brewing crew take Vivien for a spin in Standard, Pioneer, and Modern. What monsters will she find?

Broadly speaking, Vivien’s abilities are only as dangerous as the creatures she can find. A trickle of 3/3 tokens has some value in a low-resource game, as does finding bonus creatures with her static ability, but these abilities take several turns to pay you off. They look less impressive when Vivien dies quickly, when opposing decks are going over the top, or when your own deck simply has better things to spend mana on.

Her most explosive ability is the -2, which generates both card and mana advantage. It rewards you for having not just “silver bullet” tutor targets, but even specific “duos” of creatures that create a 1-2 punch. Think Omnath, Locus of Rage searching up Risen Reef, or Ravager Wurm searching up Thassa, Deep-Dwelling. This week’s Standard build surrounds Vivien with an Elementals strategy: a deck that already generates lots of mana and has plenty of creatures for Vivien’s static abilities, as well as high-value engine pieces that her -2 effect can find.

In the older formats, a broader pool of creatures means that Vivien’s -2 can get more than just generate value; instead, you can win the game immediately. The Pioneer build uses Vivien to assemble the Heliod, Sun-Crowned + Walking Ballista combo in a green Planeswalkers ramp deck. The Modern deck finds the equally deadly Avalanche Riders, surrounding them with numerous blink effects anchored by Ephemerate, Soulherder, and Yorion, Sky Nomad. Paradoxically, the preference in Pioneer and Modern for cheaper, more efficient spells means that Vivien has a better chance to be the best thing happening on the battlefield.

For a card with as many modes as Vivien, the options are nearly limitless, but the bar is high for 5 mana permanents so there is plenty of work still to be done. What other strategies might be able to harness her powers?