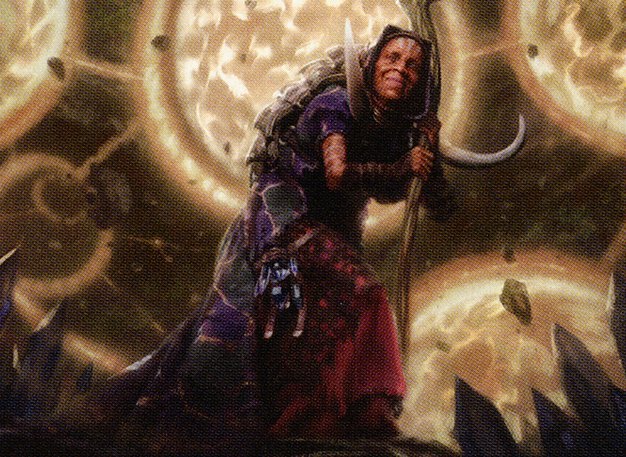 The final episode of Rogue Refinery is live! This week, Paul Cheon, AliasV, and the Faithless Brewing crew take a look at Rielle, the Everwise in Standard, Pioneer, and Modern. The best case scenario for Rielle is a massive card draw engine that also grows to 10+ power. The worst case scenario? Your opponent removes her immediately and you have nothing to show for your investment. That being said, the trophies flowed freely this week in multiple formats. Have players been sleeping on this card?

Creatures like Rielle can be described as a “removal check.” If you ever get to untap safely, Rielle can draw so many cards that you’ll never lack for resources. The trick is to either mitigate the risk of her dying, or make the reward so great that you can live with the variance. Either way, Rielle cannot be your only plan.

The first home we explore is an Izzet Phoenix strategy. Arclight Phoenix is already interested in cards that draw and discard, which get supercharged if Rielle is in play. The inevitability of Ox of Agonas from the graveyard adds yet another layer of resiliency to the blue-red spells engine, which had previously suffered from running out of gas in long games.

A much different approach is taken in the Jeskai Cycling list. Here, Rielle comes down only when she can be immediately followed by a cycling card, potentially drawing two extra cards per turn cycle. Because cards like Flourishing Fox and Neutralize also have meaningful game text as both threats and useful removal, this deck can switch roles easily depending on the needs of the matchup.

Finally, the larger card pool of Modern gives access to some truly astonishing discard spells: Burning Inquiry and Goblin Lore, which draw 6 and 7 cards, respectively, if Rielle is in play. “Discard 3” is also the magic number for Hollow One, a strategy that has faded away since the banning of Faithless Looting, but might be primed for a renewal with Rielle in the fold.

Episode 6 is the series finale for Rogue Refinery, which is part of Wizards’s new experimental lineup of Video On Demand content on the main Magic YouTube channel. If you enjoyed this style of content and would like to see more of it, or have suggestions for improving the show, let us know in the YouTube comments. Your feedback is very much appreciated!

For those of you listen to podcasts, we will also be continuing our weekly explorations of promising build-arounds over at the Faithless Brewing Podcast. Part 2 of our Brewer’s Guide to M21 will be out tomorrow, and we can’t wait to jump into the leagues with the new cards starting next week.