Raging Bull: Thinking Outside the Ox 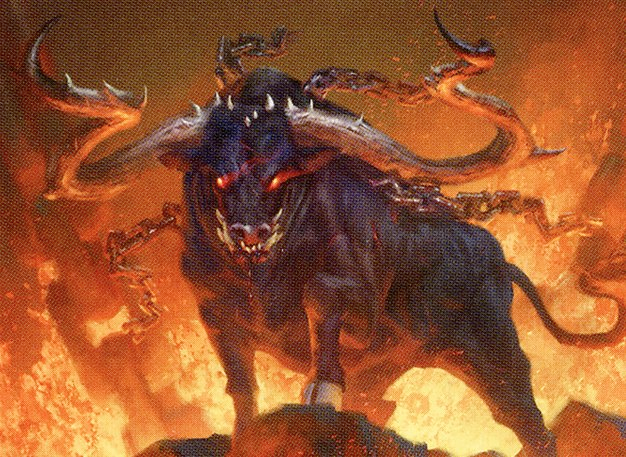 Bedlam Reveler is a gem of a Magic card. When it is fully powered, you get an above-rate creature (3/4 prowess for RR) that also draws three new cards. That’s a straight up 4-for-1, a better rate than Ancestral Recall. Are there hoops to jump through? Sure, but that hasn’t stopped Reveler from finding a home in Mardu Pyromancer (may it rest in peace) and more recently in Red Prowess. When surrounded by the right pieces, Reveler provides a powerful endgame that thrives on what red decks are already interested in doing.

If a 4-for-1 off Reveler sounds attractive, can we interest you in a 4-for-0? That’s right, no cock and bull: how about an above-rate creature (5/3 for RR) that you can cast directly from your graveyard, and still draw three new cards to boot. We’re entering Niv-Mizzet territory in terms of raw card advantage, but with an efficiency and built-in recursion that is in a class by itself. Why buy the cow when you can escape it for free?

This week, we’re grabbing the horns of Ox of Agonas, the most exciting creature to break loose from the underworld of Theros. This won’t be our first rodeo with the escape mechanic, but there are no sacred cows in brewing. The Titans may have more pedigree, and Breach may steal headlines, but it would be a terribull misteak to leave this mad cow in the bullpen. Unlike Reveler, the Raging Bull is agnoxtic about what card types it will eat: spells, creatures, fetch lands, everything is fuel to a four-chambered stomach. Modern Dredge has already been beefed up by the Red Bull, but can it also give wings to other strategies? We’re feeling bullish on Ox of Agonas, and we’ve got brews til the cows come home in both Modern and Pioneer. Plenty to ruminate on, but we’ll steer you in the right direction!