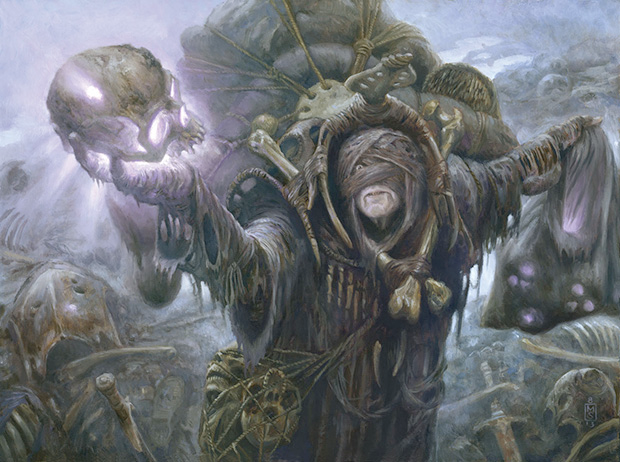 Twice each week, Wizards of the Coasts publishes a partial list of all the decks that achieved a perfect 5-0 record in the Modern League on Magic Online. Colloquially known as the “deck dumps,” the Modern 5-0s published on May 4, 2021 featured 49 decklists. While I have long been in the habit of combing over each dump looking for fresh inspiration, there is rarely time to discuss them all during our “Picks of the Week” segment on the Faithless Brewing Podcast.

To remedy that, I’ve taken my notes and converted them into this short writeup, which you may have seen previewed yesterday if you follow us on Twitter (@FaithlessMTG). This Tuesday’s deck dump had an unusually high spice quotient, with many interesting decks making use of new printings from Strixhaven: School of Mages. Here are the 10 spiciest decks that caught my eye.

Are Sedgemoor Witch and Bedlam Reveler worth more than Lurrus of the Dream-Den? The pilot Bodingle thought so, following the lead of captain_ahab who trophied with the same 75 last week

Rakdos decks with the full boat of Thoughtseize and Inquisition of Kozilek makes us miss Faithless Looting. Discard spells tend to lose value as the game drags on, and while this deck can always convert them to an extra token thanks to Witch or Young Pyromancer, there are few ways to cash them in for a full card. The key to making Pyromancer and Witch good is a steady flow of cards to generate more triggers, and here Village Rites, Dreadhorde Arcanist, and Bedlam Reveler do the heavy lifting. Are some copies of Plumb the Forbidden also warranted?

We’ll be exploring Sedgemoor Witch and the Magecraft mechanic in greater detail on this Sunday’s episode of Faithless Brewing, and this is definitely a shell I’ll be tinkering with during my testing.

The latest 5-0 from Whirza master ContraEgo. Plargg, Dean of Chaos is a card I’ve been curious about since preview season:

Has anyone had success with Plargg, Dean of Chaos and Augusta, Dean of Order? 🤔 pic.twitter.com/es6iaroxkP

Here it shows up 2x, competing for space with Goblin Engineer. Plargg’s primary role is to support Mox Amber and dig for combo pieces, but it can also provide some late game grind. I asked ContraEgo whether Augusta ever made an appearance:

I have only cast her once so far, to attack for lethal. It is good to keep her in mind when you can’t use sword to double your attack power.
Plargg has been doing good work helping to pull the combo together

Okay, just once for Augusta, but every card has to start somewhere!

Literal Blightning makes an appearance in this updated take on 8 Rack from Rakdos master Dylan Kruse (Dylan_MTG). I’ve found that Lurrus and Kroxa does wonders for strategies like this, which previously struggled to end the game. But the real standout card is Blightning, a stalwart of the Standard Jund decks of yore. I was eager to learn more about how Blightning held up in 2021 Modern, so I reached out to Dylan to get more intel. According to him, “Blightning was MVP! 3 damage to a planeswalker like Karn, the Great Creator and hitting the card they fetched is huge.”

I’d say this is the shell maybe not the perfect 75. I could see it in b/r midrange as well though. Jund has already so many ways to deal with permanents. Really fun stuff though I ended up with another 5-0 as well with it.

Encouraging words for Jund Lifers everywhere. Just don’t forget that Blightning has been updated to hit those newfangled planeswalkers!

Speaking of Rakdos Midrange, this spicy take has appeared in several consecutive 5-0 dumps now, sparking hope that maybe Waste Not could find a permanent competitive home in Modern.

Waste Not is a card that I and many others have been chasing for years, a brewer’s “white whale,” if you will. I have vivid memories of Grand Prix Hartford from three years back, when I was frantically trying to find the exact ratios of Funeral Charm, Piracy Charm, and Snapcaster Mage needed to carry my Grixis Waste Not brew into Day 2 (I ultimately fell one round short).

What I learned was that Waste Not works best as a value engine grinding out small triggers over time, rather than trying to assemble one explosive combo sequence. The strategy is held back mainly by only getting 4 copies of Burning Inquiry. But in this build, piloted this week by illwill552 and ultimately originating in the Waste Not Discord community (of which Dylan_MTG is curator), you get access to extra copies thanks to Dreadhorde Arcanist.

This is also a list of mine from the waste not discord we’ve had several 5-0s now from people with it. If you wanted to try waste not I’d start here. https://t.co/UPiV4XN96w

The second challenge is making use of all the debris from Inquiry’s random discard. Here, Kroxa, Titan of Death’s Hunger and Lurrus of the Dream-Den are on graveyard duty, helping to ensure that you are losing too much material if you have to cast Inquiries without Waste Not in play.

This deck is my Pick of the Week and as such will be discussed in greater detail on this Friday’s episode of Faithless Brewing, so tune in then for more Burning Inquiry action!

With Prismari Command now a staple in Izzet, why not get more from your Treasure token? We’ve seen builds that go whole hog with playsets of Indomitable Creativity on top of 4x Through the Breach and 4x Emrakul, but the pilot maear opted for a lighter touch.

Just a single copy of Indomitable Creativity complements the primary Through the Breach plan, supported by Prismari Command and a single fetchable Dwarven Mine. With the ability to pivot to a controlling role, fine-tuning the ratios of interaction and combo pieces seems like an important area of further exploration.

I do wonder how important the white splash is. Teferi, Time Raveler is rarely wrong, but splashing extra colors can be costly in aggro heavy metagames.

From the school of “What if Pioneer, but in Modern?” comes this Sultai Control deck popularized by Aspiringspike, and piloted this week by vosskiller. Five mana for Tibalt, Cosmic Impostor has been just about right for Pioneer, but is only gradually making inroads to Modern.

I picked up 2 more trophies on stream today (and a 1-2 drop CURSE YOU MONO BLUE TRON) for a total of 16-2 with this 75. The deck feels insane so far, and if i’m ok tomorrow after getting my second covid shot i’ll play it in tomorrow’s challenge👍 (with maybe some sb changes) pic.twitter.com/oq775nslQT

There is nothing particularly fancy about this concept, apart from the Bring to Light loophole that allows Tibalt to be cast for a mere 3UG. Apart from that, the BTL toolbox is quite small: only Damnation stands out as a main deck silver bullet. The sideboard adds Crumble to Dust, Unmoored Ego, and Weather the Storm as high impact one-ofs. Aspiringspike is a reliable guide on blue control strategies, and this build seems to have all the right tools.

Why use two attack steps when one will do just fine? Never_DidntHaveIt’s take on All-in Nivmagus Lumimancer features full playsets of some rarely seen cards: Tainted Strike, Assault Strobe, Ground Rift, even Slaughter Pact. Tainted Strike is only useful if you’re planning to deal the full 10 infect damage in one blow, so you know this deck is not messing around.

Akoum Hellhound gets the nod over prowess creatures. Assuming an uncracked fetchland, Hellhound starts at 4 power, where Monastery Swiftspear would need three prowess triggers to achieve the same damage output. I’m not actually sure which scenario is more likely — my instinct says Swiftspear is better, but I’ll defer to Never_DidntHaveIt’s success for now.

We’re used to thinking of Underworld Breach as a combo enabler, but if you squint, all it really says is “Cast a few extra spells.” Why not try it in a Prowess shell? That seems to be the thought process in this Grixis build from SightWinner.

We discuss this deck further on Friday’s episode of Faithless Brewing, including the puzzling lack of a 15th sideboard card. Lurrus of the Dream-Den makes sense, even though it is only usable in matchups where Street Wraiths are sided out in games 2 and 3.

Speaking of Street Wraiths, I am surprised to see them here supporting only Scourge of the Skyclaves, without it’s partner in crime Death’s Shadow. Did SightWinner feel that the other creatures were simply more valuable or reliable than Shadow?

The most striking thing about this Orzhov Midrange deck from Tiago Lajoso (TuggaNaxos on MTGO) is the complete lack of Path to Exile. Path has fallen so far down White’s power rankings that it no longer even makes the 75, and for good reason: giving your aggro opponents an extra land can be disastrous these days. Meanwhile, Skyclave Apparition and the newly printed Vanishing Verse cover most of your bases, and a full playset of Kaya’s Guile makes Orzhov very well positioned against wide swaths of the field.

I was initially confused by the absence of Silent Clearing, having just come off a 9-1 run with Orzhov Stoneblade in which Silente Clearing was perhaps the most important card in the deck.

Getting a feel for Elite Spellbinder for this week’s @FaithlessMTG.

Jury is still out on Spellbinder, but Wasteland Strangler was better than expected. pic.twitter.com/VSgJyT7DB0

But my build was relying on Aether Vial, which has completely different considerations. Tiago was kind enough to explain their reasoning:

Finally, for the paper boomers, we have a true gem from Modern’s deep tier 3: actual factual Tooth and Nail. Sometimes called “Mono Green Control” or “Mono Green Devotion,” Kevincito’s build avoids the traps of some Devotion builds and eschews low impact cards (e.g. Wistful Selkie) in favor of heavy mana disruption. Trinisphere, Mwonvuli Acid-Moss, Plow Under, Primal Command, and Eternal Witness mean that from turn 2 or 3 onward, you can expect to have your mana under pressure. Meanwhile, the green deck is inching ever closer to the 9 mana needed for an entwined Tooth and Nail (fetching Xenagos, God of Revels + Emrakul), or simply pulling far ahead with a Nissa, Who Shakes the World.

It’s hard to imagine that this deck has become any better positioned over the years, but it always warms the heart to see an old favorite return.

And That Was Just Tuesday

Modern may not be in the spotlight for any major tournaments these days, but it’s an amazing hub of constant innovations. With Modern Horizons 2 just around the corner, the format is sure to get even more exciting with tons of new tech to explore. You can bet that we’ll be covering all the latest innovations at Faithless Brewing, and hopefully hoisting a few more trophies of our own!

Liked it? Become a Supporter and Join the Faithless Family!