First Drafts: 12 Pioneer Brews to Get the Juices Flowing 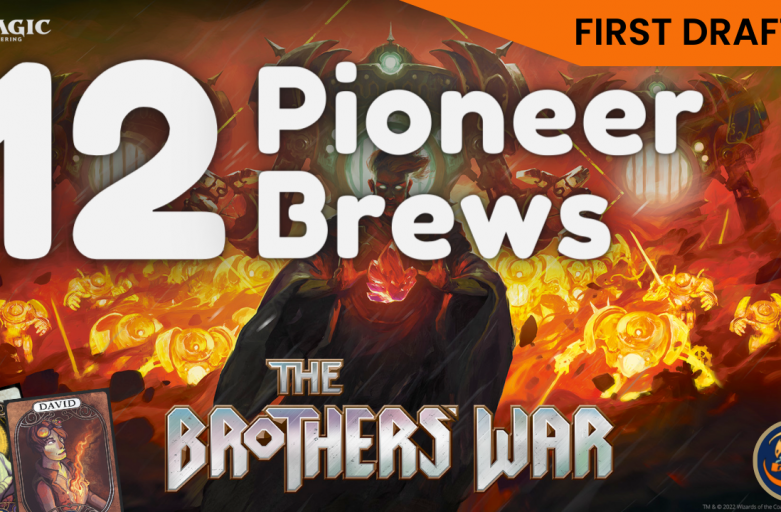 Looking for something fun to try now that The Brothers’ War is available online?

In this article we present 12 new Pioneer decks from the mind of our resident brewmaster, David Robertson. These decks are untuned and (so far) untested. They are meant to be more of a sketchpad. The goal is to highlight interesting synergies and start to envision how these cards might function together in a deck.

On to the lists!

Ashnod, Flesh Mechanist is a cool design that asks a difficult question: how much is a Powerstone really worth? What can we spend the mana on? Do we benefit simply from having game objects?

Ashnod demands a sacrifice shell, of which Pioneer has several flavors.

In this build, Trail of Crumbs provides the largest mana sink apart from Ashnod’s own activated ability. We can also use Powerstones to cast Witch’s Oven, drink Blood, or lay Goose eggs.

Teething Wurmlet has potential to grow twice each cycle if we generate Food on the opponent’s turn. Together with Claim the Firstborn (for which Ashnod is another sacrifice outlet) we have some aggressive openings to pair with the Trail of Crumbs plan.

Another sacrifice package eschews the Cat Oven combo in favor of Unlucky Witness and Voldaren Epicure. Together with Shambling Ghast, we have plenty to feed to Ashnod and Deadly Dispute.

Luminarch Aspirant is a tremendous creature. At two mana, Aspirant is above rate and it even has synergies with +1/+1 counters. Now, thanks to Siege Veteran, we have eight copies of the Aspirant effect, albeit at a worse spot on the curve. Does this open up some brewing space?

This deck has a simple plan of smashing face, but it does so with style and panache. If we sneak a +1/+1 counter onto Baird, Argivian Recruiter, either with Luminarch Aspirant, Siege Veteran, or Kumano Faces Kakkazan, we can spit out an army very quickly. Similarly, placing a counter onto Shatterskull Charger gives us a permanent 5/4 trample haste for just 1RR.

These synergies are easily defeated by creature removal, so we choose our threats accordingly to shore up attrition matchups. Phoenix Chick can deliver a lot of chip damage (especially when boosted by counters) and Recruitment Officer is a low opportunity cost way to keep the cards flowing in a longer game.

The Prototype mechanic from The Brothers’ War is both tantalizing and frustrating. Giant artifacts that can also be cast cheaply ought to be abusable. And yet, most of the Prototype cards are specifically designed to resist abuse. They generally lack ETB effects. That means that cheating a Prototype into play, for example by blinking the front half, is not a game-winning play by itself. That said, there’s still plenty of room to be “strong” without necessarily being “game winning.”

This deck chooses three of the more palatable Prototypes: Steel Seraph, Phyrexian Fleshgorger, and Combat Thresher. We cast them for three mana and get some fair, midrange-ish use out of their front half. Later, we can blink them with Charming Prince or reanimate them with Refurbish to unlock their final forms.

I would not expect this strategy to win a single game against combo decks or big engines that can go over the top, such as Mono Green or Keruga Fires. But if you find a matchup revolving around creature combat and trading resources early, this could be fun.

Loran of the Third Path

Loran of the Third Path is one of the set’s under-the-radar gems. She’s already useful as the first Reclamation Sage effect in mono white. This isn’t game breaking, but there are plenty of juicy targets in the meta such as Leyline Binding, Fable of the Mirror-Breaker, Wolfwillow Haven, and Fires of Invention.

But what about Loran’s final line of text? Forcing each player to draw is a strange ability, more at home in Commander games. But there is some sneaky potential for abuse.

Here, we assemble the best “force you to draw” effects within an Esper Control shell. Notion Thief (aka “Mr. Steal Your Draw”) is the best of these, but Narset, Parter of Veils is also proven. With either card in play, Loran, Baleful Mastery, Ertai Resurrected, Geier Reach Sanitarium, and Concealing Curtains all become very attractive. For the big finish we have Day’s Undoing, or just land Sheoldred and drain the opponent to death.

The exact numbers here should be tweaked, but broadly speaking these are the useful effects that operate in this space.

Third Path Iconoclast is a deceptively simple card. It looks and feels exactly like Young Pyromancer, and is slightly easier to enable. It’s cheap to cast and does exactly what it promises to do. And yet unlike Young Peezy, the tokens it produces are artifacts — which opens up some intriguing brewing space.

We start simple. In this deck, Iconoclast is merely extra copies of Young Pyromancer. Generating a single token off either 2/1 provides the duo needed for Of One Mind. We round out the deck with the usual suspects: Treasure Cruise, Opt, Consider, Ledger Shredder, and various red removal effects.

Let’s go deeper. If we specifically care about generating an artifact from every spell we cast, there is also Saheeli, Sublime Artificer. Now with Iconoclast we have 7 ways to fill our board with artifacts as we cast spells. How to profit from this?

Don’t play this list as-is. It’s intended to simply highlight possible payoffs within the Spells-plus-Artifacts space. Probably you want to streamline the payoffs and play more abundant sources of card draw, to guarantee that you trigger Iconoclast every turn.

Further down the rabbit hole. What if our payoff is Inspiring Statuary? We’d need some spectacular non-artifact payoffs to make Statuary worth it. Ugin, Karn, Ulamog, and Fable of the Mirror-Breaker attempt to fill that void.

Mishra’s Research Desk is an amazing tool for strategies like this. We need cheap plays to trigger Iconoclast and power Moonsnare Prototype. Research Desk does that job while also giving us four looks to find our payoffs later. We can even use Saheeli’s -2 to convert any artifact token into another Research Desk and keep digging for gas.

Finally, a deck that is all-in on “whenever you cast an artifact spell.” Third Path Iconoclast joins Sai, Master Thopterist, Saheeli, and Hurkyl, Master Wizard in rewarding us for simply casting artifact spells, any artifact spells.

The trouble is that, unlike Opt and Consider, artifacts do not naturally chain into one another. How do we keep the cards flowing? This deck turns to Paradoxical Outcome, a brute force solution that converts a board full of Springleaf Drums, Mox Ambers, and Moonsnare Prototypes into a fresh hand of cards and a fresh set of cast triggers. We also get Mishra’s Research Desk and Emry, Lurker of the Loch for additional artifact “card draw.”

Of the three legendary meld creatures in The Brothers’ War, the most polarizing Is Titania, Voice of Gaea. Most players understand that Urza and Mishra are weak, clunky cards. But some nevertheless contend that Titania’s base stats are reasonable. If 1GG for 3/4 reach + incidental lifegain is playable, the theory goes, then we are justified in building around the possibility of eventually melding with Argoth, Sanctum of Nature for a spectacular win. In our set review, we were skeptical of this assessment, but the theory at least merits testing.

The formula here is simple. We play a high land count (28 lands) with some ramp effects and some big landfall payoffs like Felidar Retreat, Omnath, Locus of Creation, Tireless Tracker, and Valakut Exploration.

Scapeshift is the big whammy finisher, but also the card most dependent upon Titania to justify its inclusion. With Titania in play, Scapeshift gains a bunch of life and sets up Argoth for next turn, when The Melding will happen and all the sacrificed lands will come back. It’s a nice dream.

Terisian Mindbreaker is a forgettable card apart from one specific synergy: with Fraying Sanity in play, a single attack with the Mindbreaker will mill the opponent’s entire library. In theory, this can happen as early as turn 4. Is there any potential for this A+B “Splinter Twin” combo?

The idea here is that Fraying Sanity is a trap. We are not interested in playing mill effects. Instead, we build a straight control deck, with removal and disruption. At some point we loot away Terisian Mindbreaker. Then, when we are ready to win, we deploy Fraying Sanity and unearth the Mindbreaker for a lethal strike.

The concept sounds elegant enough, but in practice this combo is similar to Greasefang with extra steps. Imagine that Mindbreaker is Parhelion II (a piece that needs to be in the graveyard) and Fraying Sanity is Greasefang (a three mana piece that needs to be in play) and you see the similarities. Both combos fold to graveyard hate, but Greasefang is quicker and doesn’t require an additional investment of 1UUU to deliver the finishing blow.

Still, it’s worth keeping the Mindbreaker combo in your back pocket. Both pieces are mono blue, so there are many possible ways to build it.

One of the more intriguing planeswalkers from recent sets is Tezzeret, Betrayer of Flesh. We have tested various Tezzeret brews on the podcast, finding the most success using Clue activations from Tireless Tracker, Thraben Inspector, and Reckoner Bankbuster to abuse Tezzeret’s static ability. While these decks had middling success, new artifacts from The Brothers’ War means new toys for Tezzeret to play with.

Combat Courier is perfect for this deck. The 1 drop, also known as “Two Clues in a Trenchcoat,” is ideal for feeding to Tezzeret’s static effect. You can even loot Courier away for maximum value. Important note: Unearth does not count against Tezzeret’s static, since the Courier is not an artifact on the battlefield. That means you’re free to sac the unearthed Courier for zero mana, assuming you haven’t already activated another artifact.

Combat Thresher appears again, this time as a dangerous recipient for Tezzeret’s -2 ability. The small cantrip creature suddenly becomes a monster 4/4 double strike to close the game quickly. Finally, we can test Surge Engine as another beneficiary of Tezzeret’s static text.

Go Forth and Brew!

If you enjoy this kind of content, you might also enjoy our podcast, Faithless Brewing. Each week we pick a new card for deeper exploration in Modern and Pioneer. We brew new decks, test them in MTGO leagues, and share our findings on the air.

And for more analysis of The Brothers’ War, check out our Top 5 lists, as well as our 2-part Full Set Review for Modern and Pioneer. Happy brewing!