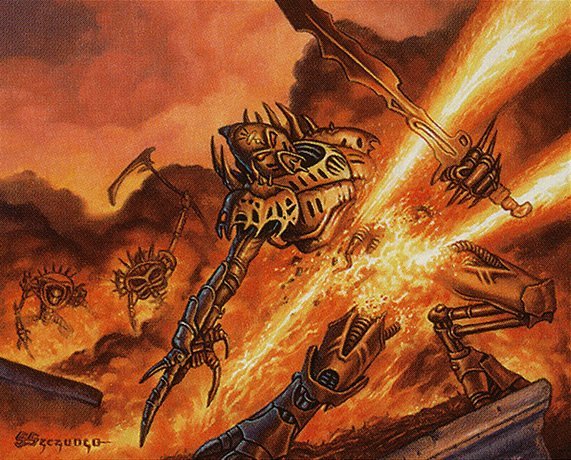 Today’s brew is an old strategy with a Modern twist: “Five Color” burn, headlined by Tribal Flames. For just two mana, Tribal Flames can whack the opponent for 5 damage — a full quarter of their starting life total.

3Teferi, Time Raveler
1Sword of Feast and Famine
1Sword of Fire and Ice

Traditionally, the cost of Tribal Flames is a very awkward manabase, heavy on shocks and fetches. But with the advent of Triomes from Ikoria: Lair of Behemoths, David sees a much shorter path to getting all five land types.

“Searching for the Sultai Triome means that a fully powered up Tribal Flames is just a fetch away,” he writes. Even a Jeskai deck that completely ignores Green and Black can still utilize Flames with minimal setup costs.

From there, it is simply a question of doubling or tripling up on each copy of Tribal Flames. Snapcaster Mage leads the way here, and gets a helping hand from Sea Gate Stormcaller from Zendikar Rising.

While generally worse than Snapcaster by most metrics, Sea-Gate Stormcaller does come out ahead on mana efficiency. Stormcaller plus Tribal Flames gives you 10 damage for just four mana, where Snapcaster would require six total mana for the same effect.

Stormcaller is also less brittle against countermagic (especially Force of Negation), and it leaves your spell in the graveyard, where a follow-up Snapcaster or Mystic Sanctuary can squeeze yet another use out of your Flames.

From there it is simply a matter of surrounding these pieces with helpers. “The rest of the deck is all just value to chip away at your opponent’s life total,” David explains. “Stoneforge Mystic is there to pay you off for having all of these 2/1 Wizards running around. Teferi, Time Raveler is great with Flames, as well as making sure your spells resolve.”

It is strange, no doubt, to put a giant burn spell in what otherwise resembles a Jeskai midrange deck. But two mana for 5 damage might be just enough reach, at just low enough of a cost, for a strategy like this to cross the finish line in Modern.