Daily Brew: Brought Back in Modern 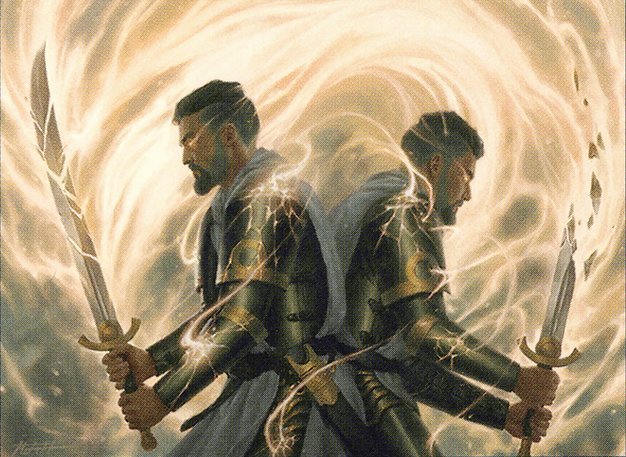 It’s been over a year since we first looked Magic 2020‘s Brought Back, all the way back in Episode 12 of Faithless Brewing. Back then, Modern was in the throes of Hogaak Summer, still reeling from the massive shakeup of Modern Horizons. White-based ramp was certainly an unlikely angle when people were routinely getting Gaak’ed on turn 3. And yet, we persisted. The losses stacked up, but so did a surprising number of wins. Brought Back, we found, actually has a lot of the right skills to compete with Modern’s top strategies.

Today’s brew is a revival of that strategy from yesteryear, inspired by the strange success of Titan Vial as popularized by fpawlusz. Titan Vial pairs Aether Vial and Elvish Reclaimer with Flagstones of Trokair for ramp, while Eladamri’s Call provides a toolbox of miscellaneous specialists, anchored by Primeval Titan and Dryad of the Ilysian Grove. It’s a bizarre but effective new entrant in the broader family of Modern “Lands” decks.

Aether Vial always seemed like a strange inclusion in a ramp deck, so why not give those slots to a card equally as explosive but with more opportunities to “lock in” your value on turn 2. David was keen for a Brought Back revival, so he swapped out the Aether Vials and brewed up the following list:

GW Brought Back by David Robertson

For those not acquainted with Brought Back’s key lines, I’ll let David explain in his own words: “The dream start is either 2 fetchlands, or Flagstones of Trokair + Ghost Quarter into Brought Back. This means we have access to five mana on turn 3. Acceptable opening lines are a Mishra’s Bauble + fetchland, turning Brought Back into a Farseek that draws a card, which is very good. Turn 1 Elvish Reclaimer into Turn 2 Flagstones is repeatable land ramp as well.”

Thanks to these explosive lines, the deck retains an element of “cheating” on mana, which means it is on the right track. However, to really get paid off, you need a strong follow up to your early acceleration. Primeval Titan has always been top class in the role, but Brought Back ramping to 5 mana means that “bridge” payoffs like Hour of Promise become especially rewarding.

“Decks like this have seen a huge power boost of late,” David elaborates, “because Field of the Dead gives you a way to win (or at least stabilize) just by playing a bunch of lands. Dryad of the Ilysian Grove turns on your fastest kills by allowing Valakut, the Molten Pinnacle to sweep away your opponent.

Often we are dealing with loose sketches on the Daily Brew, but in this case David actually had the chance to put the list through its paces in a pair of Modern leagues. “So far, the deck has actually felt very playable. Across two leagues I went 6-4 without really any serious tuning, and faced some of the tougher matchups.”

Decks like this have seen a huge power boost of late, because Field of the Dead gives you a way to win (or at least stabilize) just by playing a bunch of lands.

The list posted above shows David’s recommended configuration after these initial test runs. Just don’t make the mistake of thinking that you’ll be the only big mana deck at the table. “The list shown is the updated sideboard,” David notes. “Damping sphere is needed to help with Tron and Amulet. Although you do have 4 Ghost Quarter, so you can in theory slow down their best draws.”

If there’s a lesson from our last attempt at Brought Back, it’s that we didn’t go hard enough on Field of the Dead. Back then, the card was brand new and the format was too fast for its true power to be revealed. These days, the Field + Dryad + Valakut endgame is well established, and we’ve also got options like Lurrus of the Dream-Den to provide additional synergies with Mishra’s Bauble. There’s a lot left to explore, especially now that Cleansing Wildfire has put Flagstones of Trokair back on the radar for many Modern brewers. Brought Back might be another powerful angle for these strategies to exploit.