Cryptic Musings: Why 1UUU Is Worth Paying 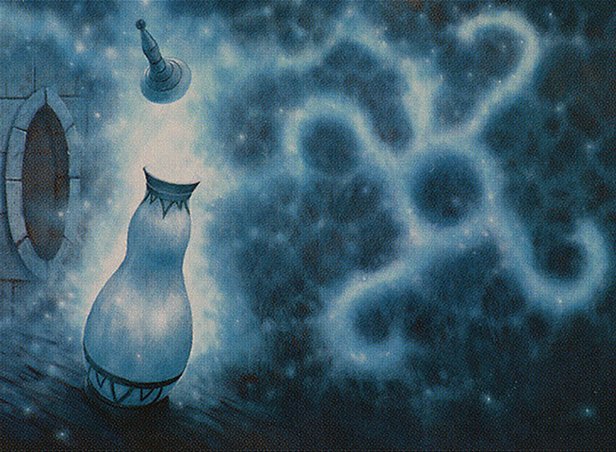 “Why do you like that card so much?” One day, when playtesting a Grixis Whirza deck with a good friend after the Mox Opal ban, I found myself lamenting the lack of Cryptic Commands in the list. I never played Simic Oko-Urza in its heyday, but a grindy midrange deck with Cryptics and no infinite combos is so far up my alley that it opened a vintage bookstore and roasts its own coffee next door.

My friend’s blunt question prompted this reflection on my love for Cryptic Command. You see, I take pride in being a player of “fair” magic decks in blatantly unfair formats. Maybe pride is the wrong word, but I have an intense dislike for winning “out of nowhere” or for rote execution of combos. And while non-deterministic combos can be fun to execute, I would never want to sit across the table from a human who has to suffer through me doing so (even at the blistering pace I’ve seen some Nexus of Fate players execute.

The Fairest of Them All

Fair versus unfair deserves a much longer discussion at another time, but today I’ll be brief. In general, an “Unfair” deck in Magic will win through using a powerful combo. Sometimes the combo is 1-2 cards, sometimes it’s an engine built into the deck that just kicks into overdrive with certain cards in play. These are the decks where playing against them you feel like you could lose at any second. In truth, some of my favourite Magic is playing against them with a fair deck, carefully walking the tightrope of interaction and proactiveness while remaining vigilant for their ability to end the game on the spot. “Fair” by comparison, eschews these choices for cards that are individually powerful, or synergies with much lower payoffs. I often remark that fair decks resemble the kind of Magic you’re likely to see in the average limited game.

Cryptic Command is a powerful but extremely fair card. In terms of mana efficiency, it’s clearly acceptable. While Dismiss is apparently too pushed to be seen again, and Counterspell remains above the modern power level (fix this injustice Modern Horizons 2), most of the modes of Cryptic allow you to get two spell effects for the mana you would have to pay for them anyway. What you’re giving up is opportunity cost. Cryptic fits two effects onto a single card, but you can’t play half of Cryptic on turn 2. Cryptic Command also doesn’t win games on its own; the rest of your deck definitely has to do the heavy lifting there.

So how does Cryptic Command work exactly? Like the other “Choose 2” commands in Lorwyn, and the following cycle in Dragons of Tarkir, Cryptic Command offer six distinct modes: A-B, A-C, A-D, B-C, B-D, and C-D. Each of these has some obvious case uses and some more niche ones. I am not responsible for the loss of any entry fees, prize tickets, or play points lost while trying to execute any of these plays.

Rising to prominence with the release of Mystic Sanctuary, Counter + Bounce has been one of my favourite modes for a much longer time thanks to its synergy with Snapcaster Mage (my favourite card of all time) or even the more rarely seen Torrential Gearhulk. Picking up your creature allows you to then replay your favourite rebuying effect, and have Cryptic ready to go again. My favourite deck which utilized this was Corey Burkhart’s Grixis control lists of yore, with the full 4 copies of Cryptic and Kolaghan’s Commands.

Rarely used but when the going gets tough, the tough get fogging. Blue’s main appeal in most decks I’ve played is a close contest between card flow and the tempo gain from countermagic. This mode is certainly a bit of a desperation move, hopefully countering a non- creature threat that your opponent was attempting before combat and locking down their creatures for combat.

Ah, Dismiss. For anyone who ever played with this tempest era gem, there are few two for ones cleaner in all of Magic than the humble Dismiss. With a slightly more prohibitive cost, this is perhaps the most humdrum mode of Cryptic, but it always feels good, like your favourite weeknight meal in the winter.

With many of the same tricks as A-B available to us, the bounce mode of Cryptic quickly becomes apparent as the mode that most frequently leads to flashy, or just generally neat plays. Coupling that with the tapping mode, you can effectively “fog” your opponent over and over again. Some decks in modern most certainly have a problem with this, the most prominent that is still receiving heavy play is Eldrazi Tron. This delaying tactic can give you enough time to find whatever other answers or engines you might need to progress your gameplan.

My most exciting Magic memory of my teen years was when I won a JSS qualifier in downtown Toronto, and one of the cards that helped take my mono blue deck to the finals was my good friend Boomerang. The tempo gain from sending most permanents back to your opponent’s hand is decent, and this mode of Cryptic is even able to bounce lands. But even when it’s being a little more of a workhorse, being able to take most permanents off the battlefield has some value.

Ah, the ol’ fog-cycle. Being on the other end of endless chains of these can be quite the frustration, and given it’s usually cast when the game is on the razor’s edge of doom, tensions are high. You’re digging for answers, and slowing down their team. I recently won a game against Dredge because I was able to do this twice and cause them to deck out in concert with Ashiok, Dream Render.

1. Cryptic Command is fair. Clocking in at 4 mana with no mode that is particularly obnoxious, paying an extra blue on your Dismiss is never going to have anyone feel like they were cheated out of getting to play Magic.

2. Cryptic is tricksy. This Swiss Army knife of a card allows you to do combinations of things on a single card in different circumstances that few other cards do.

Zach Ryl is a high energy, high output, endless creator. When he’s not literally cooking, mixing drinks, or studying them, he finds occasional time to stream or pen articles about magic. Follow him on Twitter @ManaCymbal, and hear about fresh brews he’s working on at the Serum Visions Podcast, available through most podcast providers.