Brewer’s Guide to Eldraine: Knights of the Round Table 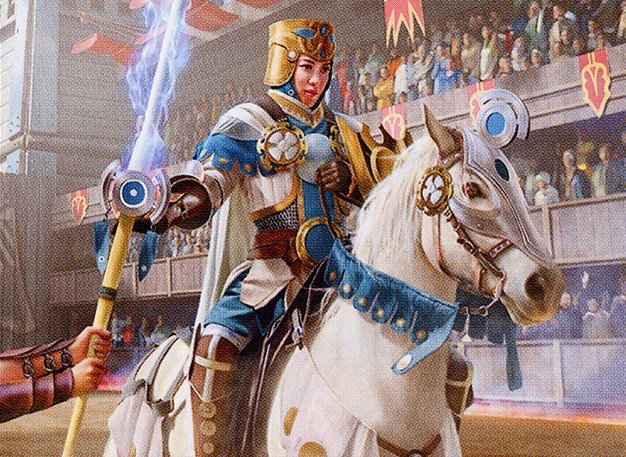 There are 46 Knights in Throne of Eldraine, plus an additional thirteen cards that mention Knights, so I guess we are supposed to try to make Knights happen? Bad news, though: it’s probably not going to happen. Even with all these new toys, Knights are neither fast nor disruptive, and mostly lack enticing payoffs. At best, I expect Knights to offer a subtheme variant to Humans, similar to the Soldiers deck that pops up from time to time. For completeness, here are all the new Knight cards that might (but probably won’t) matter for Modern:

Honorable Mention: Syr Carah, the Bold. A really striking combination of abilities, but so cost-prohibitive that you basically need to cheat this in with Goryo’s Vengeance and then also go off with it all at once. That seems laughable, but Syr Carah wants a lot of the same cards that Torbran, Thane of Red Fell wants, and both work with Goryo’s, so that’s at least worth keeping in mind.

Honorable Mention: Deathless Knight. Anything with four power and haste is better than it looks, making this an interesting card for Stompy decks, Devotion decks, or even as a weird Squee impersonator. Has no meaningful synergies with other Knights outside of the black lifelinkers.

Honorable Mention: Stormfist Crusader. A straight up bad card, but Knights tribal might want something to trigger spectacle and keep the cards flowing.

10. Venerable Knight. A Knight deck will need one-drops, and this is a one-drop. Probably should just run Champion of the Parish though.

8. Syr Faren, the Hengehammer. An acceptable attacker if you squint and a cheap legend if that matters. Provides two pips of devotion while potentially doubling up your Aspect of Hydras. Maybe a role player in Mono-Green Stompy, but the colors are all wrong for a Knights deck.

7. Murderous Rider. A useful option for other archetypes, this is technically a Knight and is findable off Acclaimed Contender. However, a Cavern of Souls/Unclaimed Territory manabase can’t readily support Swift End, so you pay a large cost to include this

6. The Circle of Loyalty. You can’t realistically expect to build up a wide board without getting wiped out by spot removal or sweepers, especially post sideboard. Circle probably won’t be cheap to cast, and Knight tribal won’t have many legendaries to trigger it. It remains a useful grinding tool and the Anthem is worth a fair amount, but I would start with small numbers of this.

5. Smitten Swordmaster. Curry Favor is one of the few truly efficient payoffs a Knights deck has access to, so I’d probably start with a couple of these.

4. Embereth Shieldbreaker. As a sideboard card, this is actually not bad at what it does.

3. Fervent Champion. At one mana with useful combat stats, Javier Dominguez might be the best Lord available. The weird Equipment clause is mostly a distraction, but there is some possibility with Sunforger and Stoneforge Mystic.

2. Worthy Knight. Unlike Young Pyromancer and Hero of Precinct One, Worthy Knight shares a type with the cards it asks you to stuff your deck with, mercifully removing that deckbuilding tension. It doesn’t make Knight tokens, but the Human tokens at least trigger Champion of the Parish and Thalia’s Lieutenant.

Whew! That’s an awful lot of cards with relevance for Modern. Some of them are admittedly long shots, but the vast majority I expect to have eventual uses in Modern, if not necessarily immediate success. Kudos to Wizards of the Coast for an amazing set.

Hopefully this guide can help you think about new ways to brew with Eldraine, or point you toward avenues worth exploring. If I missed anything or got something flat out wrong, please let me know, I am always happy to talk Modern. And if you enjoy this type of content, don’t forget to check out Faithless Brewing and follow us @FaithlessMTG for the latest developments in our efforts to break the format.