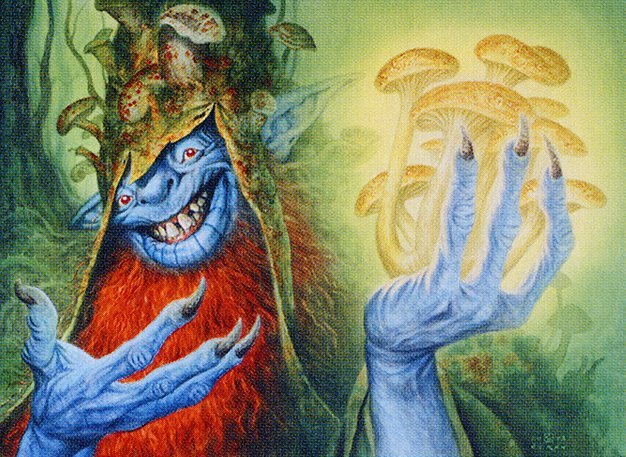 Cards in this category have potential as centerpieces of new decks built specifically to harness them, rather than just slotting into existing archetypes. Most of these cards demand that you jump through various hoops or navigate deckbuilding constraints to unlock their full potential. This is the most exciting category, as cards designed to be safe for Standard often become powerful when given access to Modern’s cheap and efficient enablers.

Honorable Mention: Lucky Clover. Adventures are stronger than they look in a vacuum, and Modern manabases are robust enough that you can maybe just throw all your favorite Adventures together and call it a deck. Clover is cheap enough to anchor such a pile; the trouble is that the Adventures don’t really synergize in any meaningful way.

Honorable Mention: Rosethorn Acolyte. It has been posited that this provides a marginal upgrade to the 1x Wild Cantor in Neobrand, but I wouldn’t bank on that. Instead, I’d look for a storm build that actively wants to empty its own hand while building up cast triggers. Seasonal Ritual makes it easier to take these game actions, but doesn’t answer the vexing question of why anyone would want to do this. Possibly something like Echo of Eons, Whispering Madness, Day’s Undoing?

Honorable Mention: Feasting Troll-King. Does the Hogaak dream live? Food is relatively cheap, but can’t be produced in large quantities outside of Witch’s Oven and Troll-King itself. Wishful Merfolk digs for the Troll while maybe providing two Foods, and Vantress Gargoyle digs for it while also providing two Foods, but we’re still talking about Standard level cards. Add in some Oko or Gilded Goose to round out the Food supply, and suddenly the deck only has a handful of slots left for efficient Modern helpers like discard spells or self-mill.

Honorable Mention: Cauldron Familiar. The combination with Witch’s Oven doesn’t go infinite with any card that I am aware of, but that could change in the future. Also just an interesting recursive option to keep in mind, for example if playing with Oko or Korvold.

Honorable Mention: The Cauldron of Eternity. In Game 1, this can be cast fairly easily for BB if you work for it. The trouble is that even at two mana, it still costs three per activation, arguably not efficient enough unless you get multiple uses or reanimate something really great. On top of that, any dedicated Cauldron build would likely fold to graveyard hate, and might struggle to balance cheap enablers with worthwhile reanimation targets. That said, this casts Metalwork Colossus all by itself, and Colossus is also a card you can maybe grab from the graveyard if you’ve gone heavy on self-mill.

Honorable Mention: Doom Foretold. If not for the early success of Esper Stax in Standard, I would have ignored this card. The fail case is that their deck ignores the battlefield, so you paid 2BW for a mopey two-for-one, a Gray Ogre, and some spare change. That’s not the worst, but it also assumes you have built your entire deck to ensure that you have useful fodder to sacrifice: a heavy deckbuilding cost for such a mediocre floor. Maybe better as a sideboard option?

Honorable Mention: Fires of Invention. Conservatively, this card provides an extra copy of As Foretold, at the cost of an extra mana plus Teferi-locking yourself. That’s not particularly exciting. The “Wilderness Reclamation” mode is more intriguing: if you have spells to cast and also a way to use your untapped lands, a single Fires effectively triples your mana. Playable mana sinks in Modern are rare, but Tireless Tracker has pedigree and also provides the fuel you need to feed the Fires. Beyond that, options are thin: Walking Ballista, Kessig Wolf Run, Raging Ravine, Inferno Titan, Skarrgan Hellkite, Scavenging Ooze, Hexdrinker, Eldrazi Displacer, Search for Azcanta, Blast Zone, various creature-lands. This suggests a basic R/G ramp shell, but the resulting deck will feel underpowered. The other route would be something like Niv-Mizzet Reborn, but most of the gold spells that fuel Niv derive their value from playing at instant speed, which Fires prevents.

Honorable Mention: Irencrag Feat. Big rituals like this are largely extinct in Modern, so any deck built around this will have a redundancy problem: your best draws require Irencrag Feat, but you will only have four copies and no guarantee of finding one consistently (unless you somehow build the deck to take advantage of Geosurge). A deck built to function without explosive mana turns, but also needing to get paid off when you do have Irencrag Feat, is a tall ask. That said, Dragonstorm is an intriguing finisher, and seven mana can still buy you a Karn Liberated or something.

10. The Great Henge. Reads like an engine piece, but it actually comes down after you’ve stuck a cheap, large creature. It then asks you to supply a stream of additional creatures to trigger the enticing draw ability. Luckily, that’s probably how you should build the deck anyway (rather than trying to cheat the Henge into play somehow). It is much easier to get a five power creature than a seven power creature: think Tarmogoyf, Gurmag Angler, Vantress Gargoyle. But a two mana Henge is much more attractive, which would require something like a fully-powered Tarmogoyf, Rotting Regisaur, Death’s Shadow, Master of Etherium, or Arcbound Ravager.

9. Faeburrow Elder. This starts at 2/2 vigilance that taps for GW, and scales up to 5/5 that taps to cast Niv-Mizzet Reborn. It mainly competes with Knight of the Reliquary: worse the turn you cast it (poor blocker, might die to bolt), mostly worse in combat, and lacking any land synergies. Likely only a consideration for decks trying to do something spectacular with the mana, such as a more creature- and planeswalker-oriented Niv-Mizzet build.

8. Korvold, Fae-Cursed King. “Whenever you sacrifice a permanent, draw a card.” This is an extremely dangerous line of text, so it is probably for the best that they put it on a fragile and clunky 5 CMC creature. If using this fairly, you probably need to ramp hard, and also play fetches + Tireless Trackers; sadly, you still get blown out if they kill Korvold with his ETB on the stack. More likely, this is a card you try to combo off with. Drawing off creatures dying is already available for less mana, but this draws off any permanent type while also potentially attacking for lethal, and also being Goryo’s Vengeance-eligible. Repeatable sac outlets with a heavy self-mill theme are the most likely direction (Grinding Station, Altar of Dementia) but creatures like Carrion Feeder, Viscera Seer, and Skirk Prospector are also considerations.

7. Grumgully, the Generous. Persist combo is now available entirely within the Goblins archetype, and all the pieces are findable with Goblin Matron or Goblin Ringleader. Metallic Mimic was never good, but it missed out on all your Goblin synergies while also diluting your deck, so Grumgully is an upgrade despite further cluttering up the 3 slot. I doubt that grafting this combo into the generic “goodstuff Goblins” will move the needle on that archetype, but a more all-in build using multiple copies of Grumgully with Murderous Redcap and Putrid Goblin might be speedy enough to explore.

6. Wishclaw Talisman. Earlier, I discussed the efficient of this card a supporting role tutor effect for a combo strategy.  It is also possible, however, to build around this as a 4-of card draw engine, using Wishclaw in tandem with cards like Teferi, Time Raveler, Karn, the Great Creator, Ashiok, Dream Render and Flickerwisp in some kind of midrange or control build. You can even put it in your Karn wishboard. This provides a tutor-for-anything effect on an artifact, so Goblin Engineer, Whir of Invention, and Emry can all grab this if you need a key non-artifact spell (Paradoxical Outcome, Jeskai Ascendancy, Assassin’s Trophy?).

5. Torbran, Thane of Red Fell. My first thought was, “This effect has always sucked.” But is that really true? Maybe the actual problem was just the heavy restrictions on cards featuring this effect: Pyromancer’s Swath, Pyromancer’s Gauntlets, The Flame of Keld… yeah, Wizards does not want us to get access to this damage multiplier very easily. In order to get around the “dies to removal” aspect of Torbran, we want store up on-board, zero mana sources of damage, so that we can immediately get the bonus as soon as Torbran resolves, without needing to untap. Wrenn and Six, Lava Dart, Gut Shot, Mogg Fanatic, Fanatical Firebrand, Pashalik Mons, Judith, the Scourge Diva, Impact Tremors, Cavalcade of Calamity, Aria of Flame, Chandra, Fire of Kaladesh, Cindervines… plenty of cards seem to work with Torbran’s requirements, so I’m more optimistic than most for our bearded friend’s prospects.

4. Vantress Gargoyle. Having argued for this card’s efficiency, we must acknowledge that Gargoyle takes work to unlock, meaning it should be treated as a build-around. Archive Trap and Chancellor of the Spires are among the best options for quickly unlocking attack mode, and cards like Visions of Beyond or Drown in the Loch can perhaps repay your investments. Vantress also has a “Ghoulcaller’s Bell” mode that becomes quite interesting with Mystic Forge or similar engines, or just in a self-mill shell. Lots of cards play in this space, so there’s plenty of directions to explore building around this exciting card.

3. Mystic Sanctuary. Reclaim isn’t necessarily worth a card, or even worth a mana (see: Noxious Revival), but putting it on a fetchable land makes all the difference. As a build-around, Mystic Sanctuary lends itself to loops, and can recur whatever spell that you are using to initiate the loop in the first place. Time Warp stands out, but also Cryptic Command, Deprive, etc. The other mode is to simply upgrade a fetchland into improving your next draw step by rebuying a strong spell (possibly much better, in the case of Terminus/Entreat the Angels). The cost for putting this in your deck is reasonable, the effect is powerful, and this may be strong enough to warrant a fundamental rebuild of archetypes like Taking Turns.

2. Oko, Thief of Crowns. Oko’s abilities are very unique and thus lead to some deckbuilding puzzles. Any Food deck certainly wants Oko, but also virtually any deck with small permanents can benefit from a stream of 3/3 Elk (possibly with haste) and the ability to Elkify opposing threats as well. Then there are extra synergies like erasing negative death triggers (Tidehollow Sculler, Spell Queller), buffing creatures with native +1/+1 counters, or creating tokens for shenanigans like Shape Anew. All of this, and much more, can be done at a very attractive price, so I expect Oko to richly reward players for building around it.

1. Emry, Lurker of the Loch. Here are a few of the cards that Emry combos with: Jeskai Ascendancy, Paradox Engine, Mirran Spy, Paradoxical Outcome, Kethis, the Hidden Hand. It is also extremely powerful as the centerpiece of a fair artifact strategy or an enabler of Thopter Foundry/Sword of the Meek combo. I have already written a lengthy strategy guide for brewing with Emry, as well as dedicated a recent episode of Faithless Brewing to building around the card — lots of people are working on Emry, and I fully expect it to be amazing, so I won’t say more here.