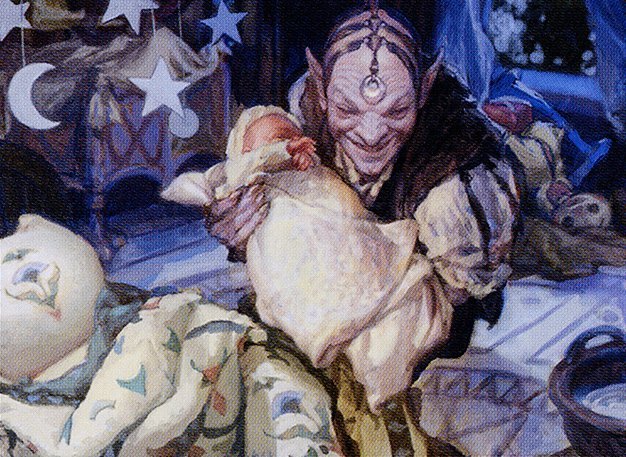 (Note: A version of this article was originally published at arenadecklists.gg)

These cards are relevant because they offer the cheapest possible rate for their category of effect. They may not immediately find homes in a deck (often because their effect is quite marginal or narrow), but they are worth keeping in mind down the road, as they are the among cheapest options in the Modern cardpool for whatever they do. Any effect that costs zero or one mana is worth consideration in this category. Ordinary effects that are newly available on a different permanent type would also fall into the category. Eldraine offers a quite extensive list here, as the Adventure mechanic led to an abnormally high number of one-mana spells. There are also some truly surprising effects offered at discounted rates, including two cycles of powerful lands.

Honorable Mention: [mtg_card]Witch’s Oven[/mtg_card]. Deserves special mention as a repeatable source of Food, and a one-mana sac outlet that doesn’t die to removal. Can only be used once per turn, so doesn’t work for infinite combos and doesn’t go off with [mtg_card]Cauldron Familiar[/mtg_card] (yet). Keep this one in your back pocket.

Honorable Mention: [mtg_card]Hushbringer[/mtg_card]. Similar to [mtg_card]Torpor Orb[/mtg_card] and [mtg_card]Tocatli Honor Guard[/mtg_card], but also stops death triggers and has slightly more attractive combat stats and a relevant creature type. A useful tool for certain metagames, but not a game-changer.

Honorable Mention: [mtg_card]Dwarven Mine[/mtg_card]. [mtg_card]Valakut[/mtg_card] decks put a lot Mountains into play, and this is also a Mountain itself. The effect is marginal, but good to keep in mind that it exists as a land option.

Honorable Mention: [mtg_card]Thrill of Possibility[/mtg_card]. Instant speed makes this technically best in class over Tormenting Voice. Does that push this into the realm of playability? A tricky question, as [mtg_card]Tormenting Voice[/mtg_card] is underpowered, but how much of that weakness is due to it being sorcery speed is not totally clear. Another candidate for a Phoenix revival, or perhaps something wacky built around [mtg_card]Improbable Alliance[/mtg_card]. Decks like [mtg_card]Grishoalbrand[/mtg_card] that want to move a single key card into the graveyard, but still care about card economy, might also find Thrill helpful in a way that Haggle is not.

Honorable Mention: [mtg_card]Corridor Monitor[/mtg_card]. Mostly worse than [mtg_card]Deceiver Exarch[/mtg_card] in Kiki Combo, but technically cheaper and could be a 5th copy. An alternative to [mtg_card]Scryb Ranger[/mtg_card] in [mtg_card]Vannifar[/mtg_card] chains. The artifact type could be relevant if you are doing a weird mashup of some kind, or if you want to untap a [mtg_card]Mystic Forge[/mtg_card].

Honorable Mention: [mtg_card]Claim the Firstborn[/mtg_card]. For some reason, A[mtg_card]ct of Treason[/mtg_card] effects have typically cost 3 or more mana and have rarely been worthwhile even in limited. Seeing this effect at one mana is surprising and forces us to ask, for the first time, what we can really do with this effect in Modern. MH1 introduced some less stingy sacrifice outlets ([mtg_card]Carrion Feeder[/mtg_card], [mtg_card]Altar of Dementia[/mtg_card]), and the peculiar wording of [mtg_card]Restoration Angel[/mtg_card] could let you steal a creature permanently if you wanted to. There’s also a world in which [mtg_card]Claim the Firstborn[/mtg_card] is just a useful sideboard tool for decks that win by attacking with small creatures.

10. [mtg_card]Vantress Gargoyle[/mtg_card]: “Giant flying beater” is a pretty small category in Modern; only [mtg_card]Mantis Rider[/mtg_card], [mtg_card]Jace’s Phantasm[/mtg_card], and [mtg_card]Tombstalker[/mtg_card] come to mind. “Giant blue 2 drop” is pretty much just [mtg_card]Thing in the Ice[/mtg_card]. Even [mtg_card]Tarmogoyf[/mtg_card] gets outclassed by this on cluttered board states. Granted, it takes work to unlock the Gargoyle’s attack mode, but the power is there to at least make this plausible. “Cast early, enable later” is a much more forgiving play pattern than cards that demand that you meet their conditions before you can even cast them or before they grow out of Bolt range. It has a tap ability with numerous build-around possibilities ([mtg_card]Mystic Forge[/mtg_card], [mtg_card]Lantern of Insight[/mtg_card], various self-mill tricks) and is even a blue artifact creature if you like [mtg_card]Grand Architect[/mtg_card]. Truly an exciting card, if a confusing one.

9. [mtg_card]Drown in the Loch[/mtg_card]: At some point in the game, this will become a split card [mtg_card]Counterspell[/mtg_card] and [mtg_card]Terminate[/mtg_card]. Only [mtg_card]Izzet Charm[/mtg_card] (very conditional) and [mtg_card]Cryptic Command[/mtg_card] (very expensive) can make similar claims. When exactly this will come online is not entirely clear; outside of dedicated mill decks, this is almost like a [mtg_card]Serra Avenger[/mtg_card] effect on a spell: you can’t cast it in the early turns, but in the later turns it will be one of your most powerful and mana efficient plays.

6. [mtg_card]Wishclaw Talisman[/mtg_card]: How much should an unconditional tutor cost? [mtg_card]Mastermind’s Acquisition[/mtg_card] is four mana, so by some math you’re getting a 1 mana discount in exchange for giving away the Talisman. But when you consider that you can pay the mana in installments, Wishclaw is actually a one-mana [mtg_card]Demonic Tutor[/mtg_card] on the turn that you use it, which is insanely cheap—rivaling [mtg_card]Spoils of the Vault[/mtg_card], but without the “Oops I died” component. Decks that want to end the game immediately, e.g. by tutoring for a missing combo piece, will love the efficiency of this card, and it fits naturally into [mtg_card]Ad Nauseam[/mtg_card]’s turn 4 [mtg_card]Lotus Bloom[/mtg_card] curve. There’s no drawback if you win the game that turn.

**A few more considerations on the value of Scry 2: almost every artifact deck in Modern is a critical mass synergy deck. You have a bunch of cheap artifacts to enable your “big” cards like Urza, Emry, Sai, Outcome, [mtg_card]Karn, the Great Creator[/mtg_card], [mtg_card]Mystic Forge[/mtg_card] etc. These are all ultra powerful artifact payoffs, but (mostly) they are not artifacts themselves, so building with them becomes a numbers game of finding the right balance of artifacts and payoffs. The ability to Scry matters most when there is a high delta between the values of the cards in your deck, and all artifact decks meet this criterion, so “Scry 2” is even more valuable here than it would be in, say, a random [mtg_card]Snapcaster[/mtg_card] deck. That said, [mtg_card]Serum Visions[/mtg_card] has tension with artifact decks because you can’t always afford to devote precious slots to a non-artifact single-use card selection spell. [mtg_card]Witching Well[/mtg_card] slots into this spot beautifully, a real triumph for [mtg_card]Mox Opal[/mtg_card] aficionados everywhere.

4. [mtg_card]Gilded Goose[/mtg_card]: Part [mtg_card]Thraben Inspector[/mtg_card], part [mtg_card]Birds of Paradise[/mtg_card], part caddie for [mtg_card]Oko, Thief of Crowns[/mtg_card], there are lots of scenarios in which a brewer might choose to Unloose the Goose. Better as a Food source than a mana creature, the Goose’s efficiency depends on what you want to get out of it. If you just want a Food, you can’t do better. As a mana source, “Bolt the [mtg_card]Lotus Petal[/mtg_card]” isn’t really a thing, but I’d assume most players will kill the Goose anyway just in case. Probably best in a deck built around Oko, but I admit to being intrigued by [mtg_card]High Alert[/mtg_card]/[mtg_card]Arcades, the Strategist[/mtg_card] with a curve starting on Goose + [mtg_card]Saruli Caretaker[/mtg_card]. I never said I wasn’t crazy.

3. [mtg_card]Deafening Silence[/mtg_card]: Much like [mtg_card]Alpine Moon[/mtg_card], a desirable sideboard effect (in this case, [mtg_card]Rule of Law[/mtg_card]) becomes much easier to play when it only costs a single mana. It also doesn’t accidentally hose creature decks, which are often interested in double-spell turns to build pressure, and it doesn’t stop [mtg_card]Snapcaster Mage[/mtg_card] (for better or for worse).

2. [mtg_card]Emry, Lurker of the Loch[/mtg_card]: This card is straight up broken and is likely to break Modern artifact strategies in general, effectively finishing what [mtg_card]Mox Opal[/mtg_card] and Urza started. In terms of efficiency, Emry will usually cost just a single blue mana. This already makes her best-in-class as a [mtg_card]Mox Amber[/mtg_card] enabler, which is a game changer even if the graveyard is locked down by [mtg_card]Rest in Peace[/mtg_card]. She almost can be treated as a mana creature, since she is likely to find an Opal or Amber which you then get to keep permanently. Already we are talking about a card in the stratosphere of [mtg_card]Deathrite Shaman[/mtg_card], without even accounting for all the other things Emry’s tap ability can do. Creatures with “Tap: draw a card” generally cost four mana to cast or activate ([mtg_card]Archivist[/mtg_card], [mtg_card]Azure Mage[/mtg_card]); Emry costs 1 to cast, zero to activate, and her ability is even stronger than drawing a random card and leads to numerous combo applications. Very quickly the efficiency comparisons break down, because Emry is in a class by herself.